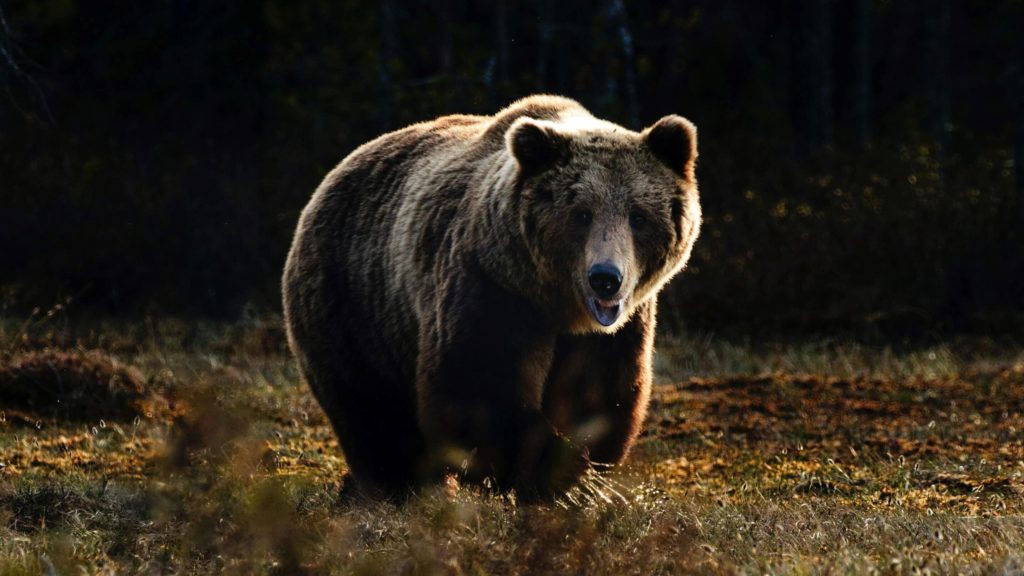 Should I Sell Stocks?

During the week of June 8, 2020, the S&P 500 index rose to the point where year-to-date total returns were 0.00%. The index that tracks large publicly-traded US companies wasn’t quite up to where it was when it started to fall in February. But it did recover enough to get back to January 1 levels. Since last week, the stock market has erased some of its recovery. Overall, however, markets are much higher than their lows.

That’s quite a rebound. In March, large-cap stocks were down 34% on the year. We were officially in a bear market (defined as being down 20% off of recent highs). Historically, the average bear market has lasted about a year and half. And the average recovery has taken two years and two months. This is reflected in the chart below. 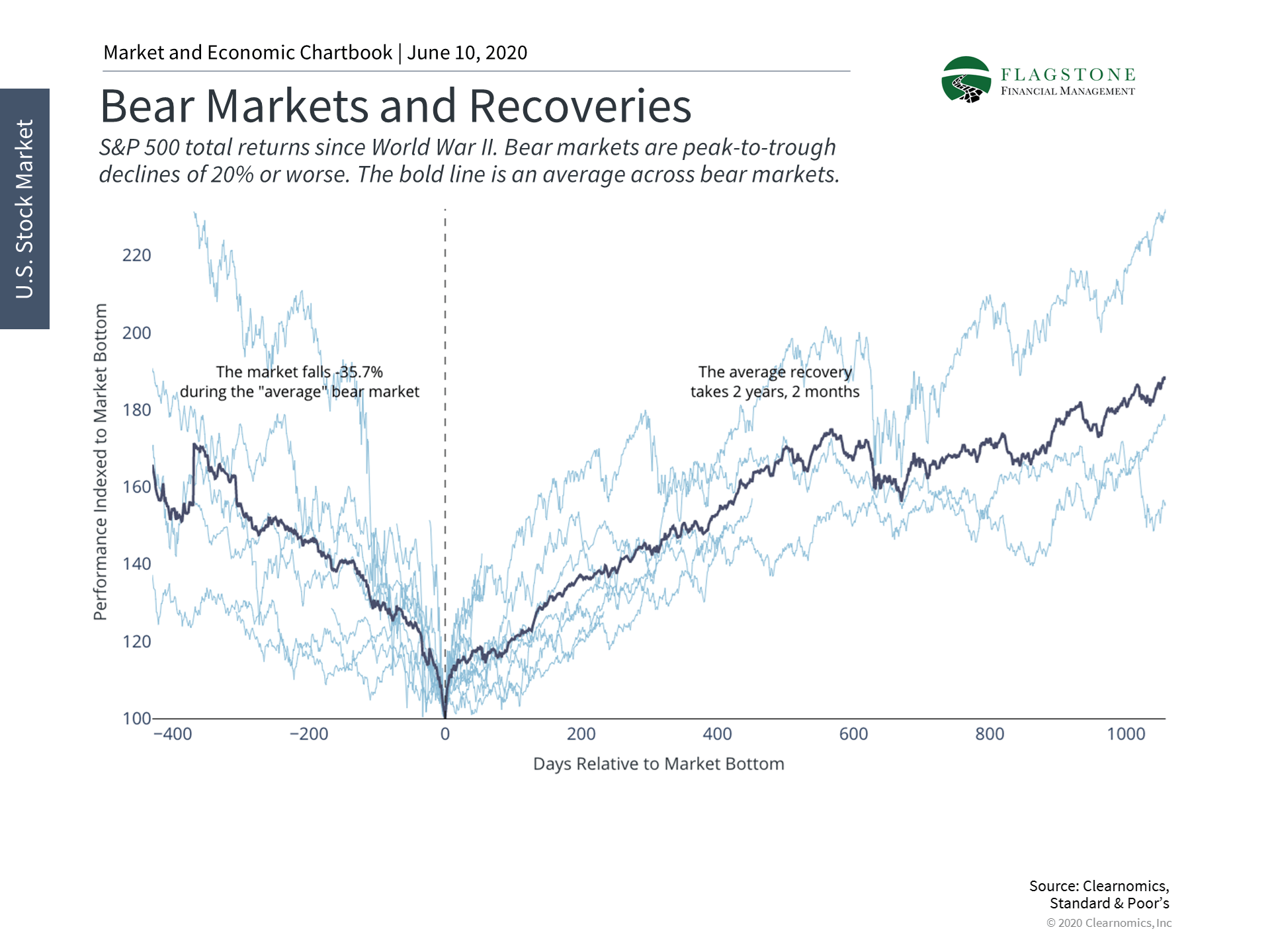 This year’s bear market and recovery look to be much shorter than average. When measuring stocks by the Dow Jones Industrial Average, the bear market only lasted 22 days. Technically, this is the shortest-ever bear market. And while we haven’t yet recovered to February highs, and we don’t know what will happen tomorrow (or any day) in the stock market, the stock market is rebounding quickly.

A few months ago, we didn’t know how quickly things might rebound. Near the beginning of March, the S&P 500 was down about 12%. Many investors started getting anxious, if they weren’t already. We started having conversations with clients about staying invested, sticking to their chosen allocation, and not trying to time the markets. When markets are down 10% or 15%, those conversations are important, real, and fruitful. But they’re fairly calm. For most investors, if their portfolio doesn’t have too much risk compared to what they can mentally tolerate, it’s not super challenging to stay the course.

When markets were down more than 30% in mid-March, investors’ limits were tested. The bear market didn’t seem to have an end in sight. News regarding COVID-19 continued to be dismal. Still little was known about the virus itself, which cast uncertainty on nearly every aspect of the economy. New jobless claims were breaking records. Cases of the virus were rising exponentially. Hospitalizations and deaths were also rising.

What was our advice to clients when the stock market was down 30% compared to when it was down 12%? It didn’t change much. Assuming investors were in an appropriate portfolio for their risk tolerance, goals, and time horizon, we continued suggesting that they stay the course. Caveats abound, and there may be real reasons that some investors do need to make some sort of change under unique circumstances. But generally speaking, when it came to decisions of choosing a stock/bond/cash allocation, we were preaching the importance of staying the course. We probably sounded like a broken record.

Why evidence, not emotions, should guide investment decisions

How could things get that bad and we suggest to effectively do nothing? Part of that is because we make evidence-based investing decisions, not emotions-based ones. That doesn’t mean we’re emotionless. We’re not apathetic to what’s going on in our clients’ minds. Nor do we think emotions are unwarranted. On the contrary, we make a concerted effort to listen to our clients, understand how they feel, and offer them encouragement and inspiration. What it DOES mean is that we’re in tune with our own emotions and the emotions of others. But we’re also in tune with data that we can use to help investors make better investment decisions.

When markets tank, it’s tempting to stop the losses – sell what isn’t doing well, and sit on the sidelines until things start to look better. But the evidence suggests that sitting on the sidelines – even just for a week – can have long-term negative effects. The chart below shows how much wealth an investor would lose if they exited the market the day after each of the 20 worst days, and then re-entered the market after the specified amount of time. Staying on the sidelines for even just one week meant the loss of $846 compared to staying invested (on an initial investment of $1,000). 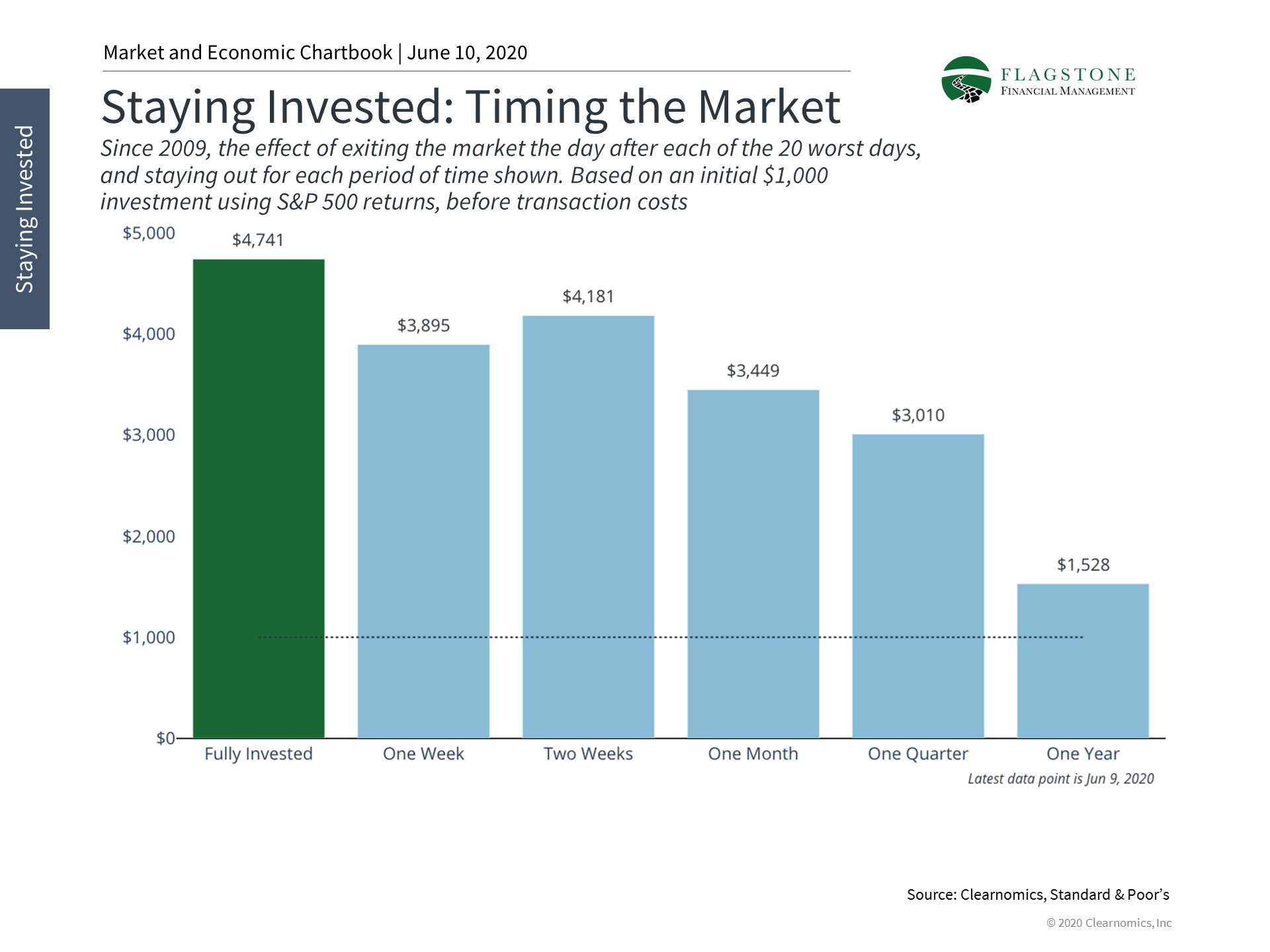 Part of the reason for the loss in portfolio value is because following market downturns, there can be some really strong days in the market. And losing out on those days costs. The next chart illustrates that point. If someone invested $1,000 25 years ago and they missed out on the best market day, they’d have $4,456 compared to $4,972 if they had been fully invested. If they missed the best 5 days, their investment would only be $3,143. 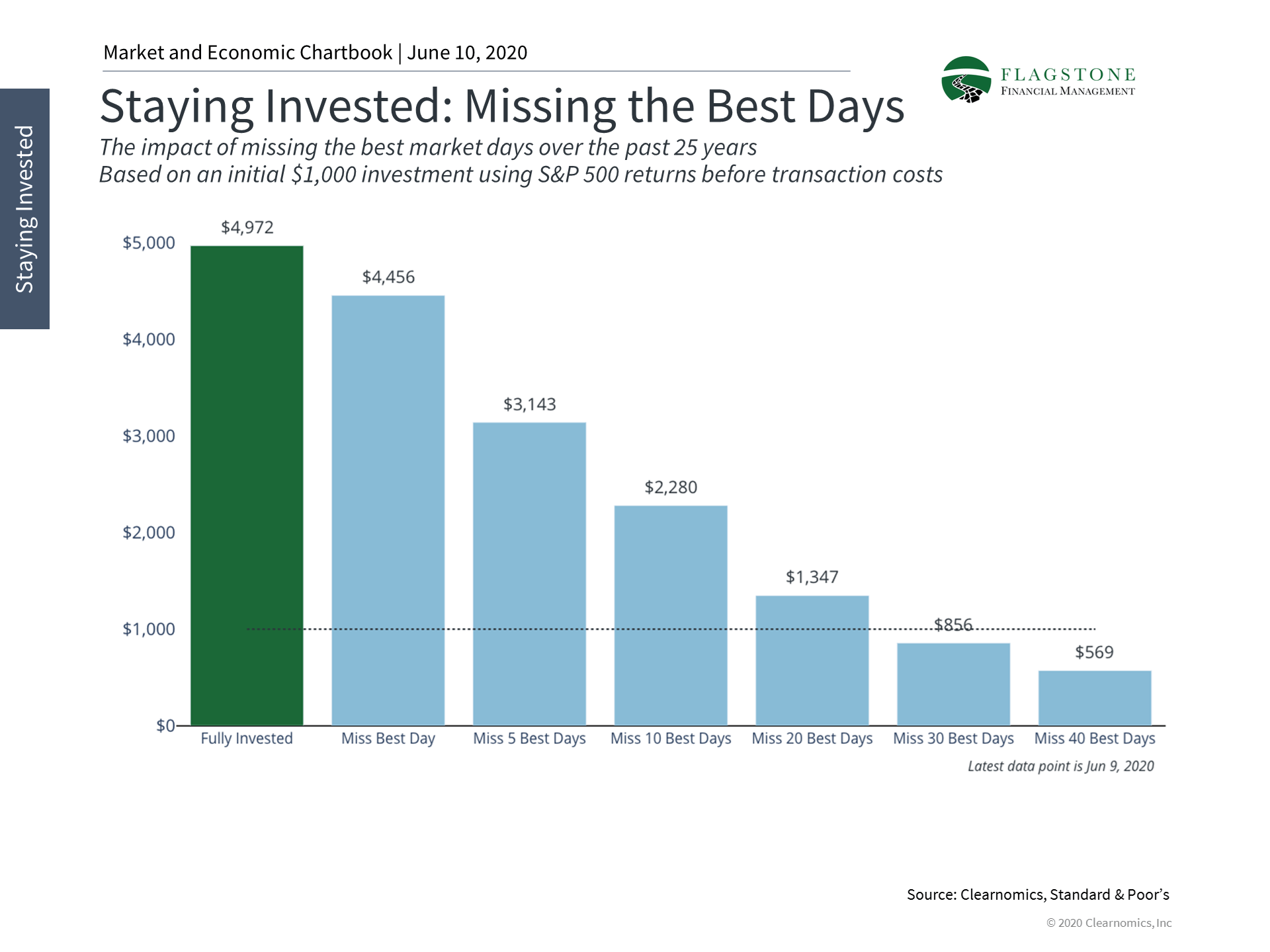 Even in a bear market, data drives decision-making

If we had a crystal ball, we would have known the stock market was going to decline in February, bottom near the end of March, and then rebound. What would our advice have been then? Of course, we would have gotten rid of stocks in February and gotten back in at the end of March. But we didn’t know that. Our advice to investors to stay invested in their chosen stock/bond allocation wasn’t because we were predicting the rebound would occur soon. It was based on data. Some of the data that is in the two graphs above.

We never will know when the next bear market is going to occur, and neither does anyone else. We also don’t know how long the next bear market will last. Nor do we know how long this new bull market will last. If you’re talking to an advisor who is predicting with certainty the next bear market, and is offering investment advice based on that prediction, run the other way. You can have a better investment experience than that. Create a financial plan with help from a professional. Form specific financial goals. Choose an investment strategy based on those goals, your time horizon, and your personal tolerance for risk. Then hang on — and lean in to the guidance of an investment advisor. It can be really freeing to let go of anxiety, fear, or uncertainty that comes with timing the markets or navigating the investment world on your own.