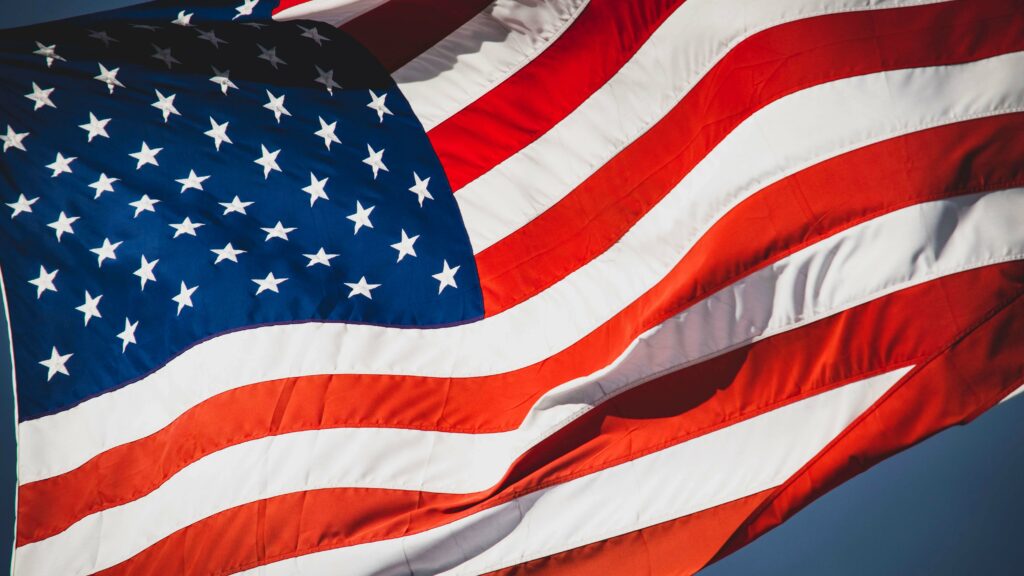 5 Insights for a Challenging Election Season

This week’s blog article comes to us from our friends at Clearnomics. They have an interesting perspective on this election season, and we want to share their insights with you.

After what has been a challenging year, many investors are worried about how markets may react in the fourth quarter. With the presidential race underway and a pandemic raging on, there is significant economic uncertainty hanging over investment portfolios. It’s natural for some investors to wonder whether they should sit on the sidelines until the dust settles.

While it may not always seem this way, uncertainty is positive for investors in the long run. This is because times of uncertainty create opportunities. Having the fortitude and discipline to invest when others are too nervous to do so has historically been rewarded. Additionally, there is always another potential investor concern around the corner. Having absolute certainty means it is often too late.

There is perhaps no better example than the past six months. Those investors who considered sitting on the sidelines after the bear market crash that began in February would have missed the recovery if they blinked. During the third quarter of 2020, the S&P 500 fully recovered its losses and gained 8.5%. Not only are U.S. stocks up 5.6% (with dividends) for the year, but the round-trip required only six months. This period is further evidence that it’s difficult to time the market effectively and that overreacting to short-term market developments can often backfire.

The market did stumble during the third quarter due to concerns about technology stocks, especially more speculative ones. This speaks to the growing importance of large technology companies to our economy. Many that are considered to be technology companies are actually in sectors such as Consumer Discretionary and Communication Services. As a whole, tech-led sectors and growth stocks have still significantly outperformed this year. The Russell 1000 Growth Index has risen 23% while the Russell 1000 Value Index has fallen over 13%.

Why has the broad stock market done well despite the pandemic? This is largely driven by the economic recovery that has been underway since cities and businesses began to reopen in the summer. Nearly all economic data show a bounce-back in many areas including hiring, consumer spending, manufacturing activity, and more.

Of course, not all areas are recovering. Restaurant dining is still down 40% across the country and there are 70% fewer air travelers. Many small businesses are closing and business bankruptcy filings are rising. This is arguably one area where targeted government support has helped to keep businesses and individuals on life support.

As we begin the fourth quarter, the presidential election is only a month away and the country is as polarized as ever. Not only are the candidates very different, they are different in ways that will likely affect every day Americans through their tax, economic and foreign policies. However, history has shown that while elections are incredibly important for all Americans as taxpayers, voters and citizens, it’s important to keep a level head when investing.

This is because the stock market has performed well over the past century under a variety of different presidents and parties. A reasonable analysis shows that there is no combination of political parties for the White House, Senate and the House that has averaged less than 10% in annual total returns. In other words, from a stock market perspective, there is no compelling reason to believe that one party or another will directly cause a recession or stock market crash.

This does not mean that there won’t be stock market corrections in the short run, or that either candidate will implement sound economic policies. What the data show us, however, is that the stock market depends on many other factors besides who controls Washington.

This fact may be difficult to swallow for many investors. After all, politics affect many parts of our lives, making it hard to separate these feelings from our investment portfolios. This is why having the discipline to do so is a critical ingredient to long-term success.

Additionally, investors and the broad market are often wrong about the impact of presidents and their policies. It was generally accepted leading up to the 2016 election that a Trump presidency would result in an immediate economic crisis and a stock market crash. Not only did this not happen, but the stock market proceeded to make new highs. The same is true during the 2008 and 2012 Obama reelection campaigns when it was argued that having a Democrat in the White House, and later the Affordable Care Act, would tank the stock market. This didn’t happen either.

As with all things, it’s difficult to separate skill from luck. It is certainly the case that specific policies can affect individual industries and companies, especially when it comes to taxes and international trade. However, when it comes to the stock market and economy as a whole, the overall trends of the business cycle simply matter much more than any individual in office.

Ultimately, investors should recognize that uncertainty is a key ingredient to achieving long run stock market returns. Without uncertainty, everyone would invest which would drive up prices and drive away returns. Although Q4 may be fraught with uncertainty, it’s also clear that many parts of the economy are recovering from the economic shutdown. The balance of these factors will be what matter for long-term investors in the years to come.

Below are five charts that highlight these important topics for the remaining months of the year. 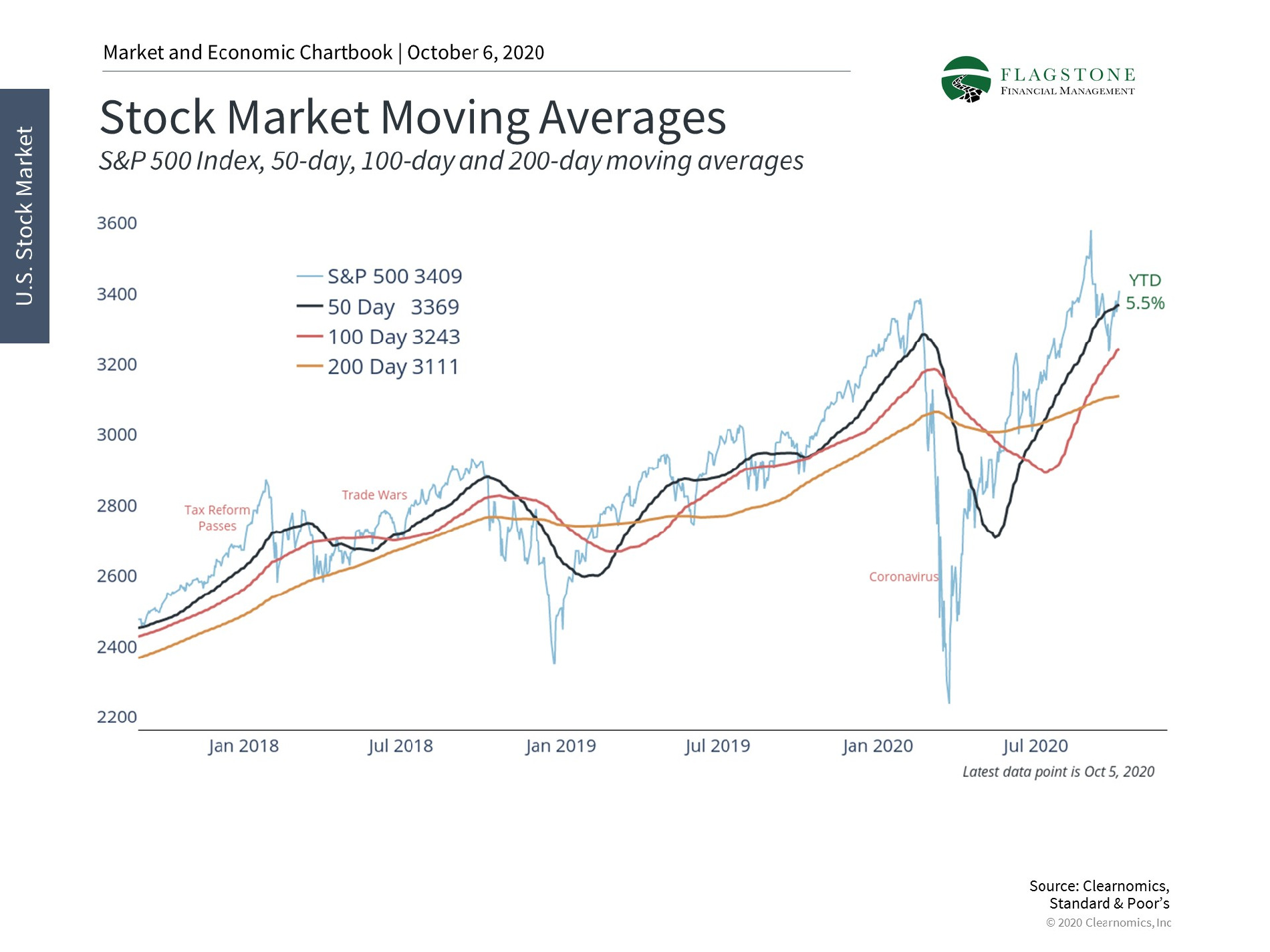 The stock market recovered its year-to-date losses and then made new highs within six months of the bear market crash in March. Although stocks did stumble in September due to tech stocks, they have still done remarkably well for the year. While investors should continue to expect periods of volatility, this period is evidence that staying invested is often the best course of action.

2. Many parts of the economy are recovering 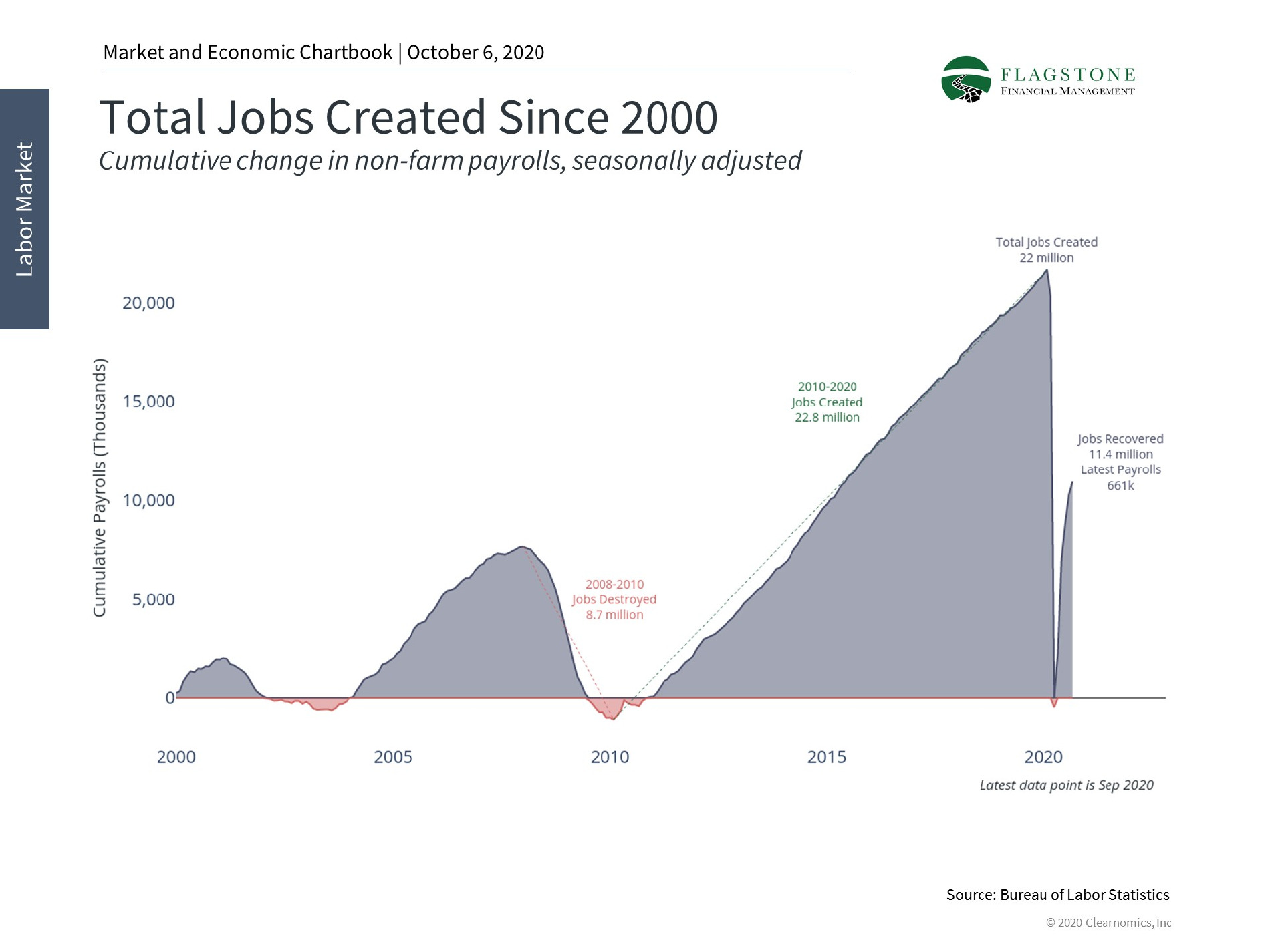 The rising stock market has been driven by a recovering economy. Despite the severity of the COVID-19 pandemic and ensuing nationwide shutdown, many businesses and workers have been able to return to work. While there are still millions unemployed and receiving jobless benefits, this can also slowly improve as we learn to better manage the ongoing crisis. 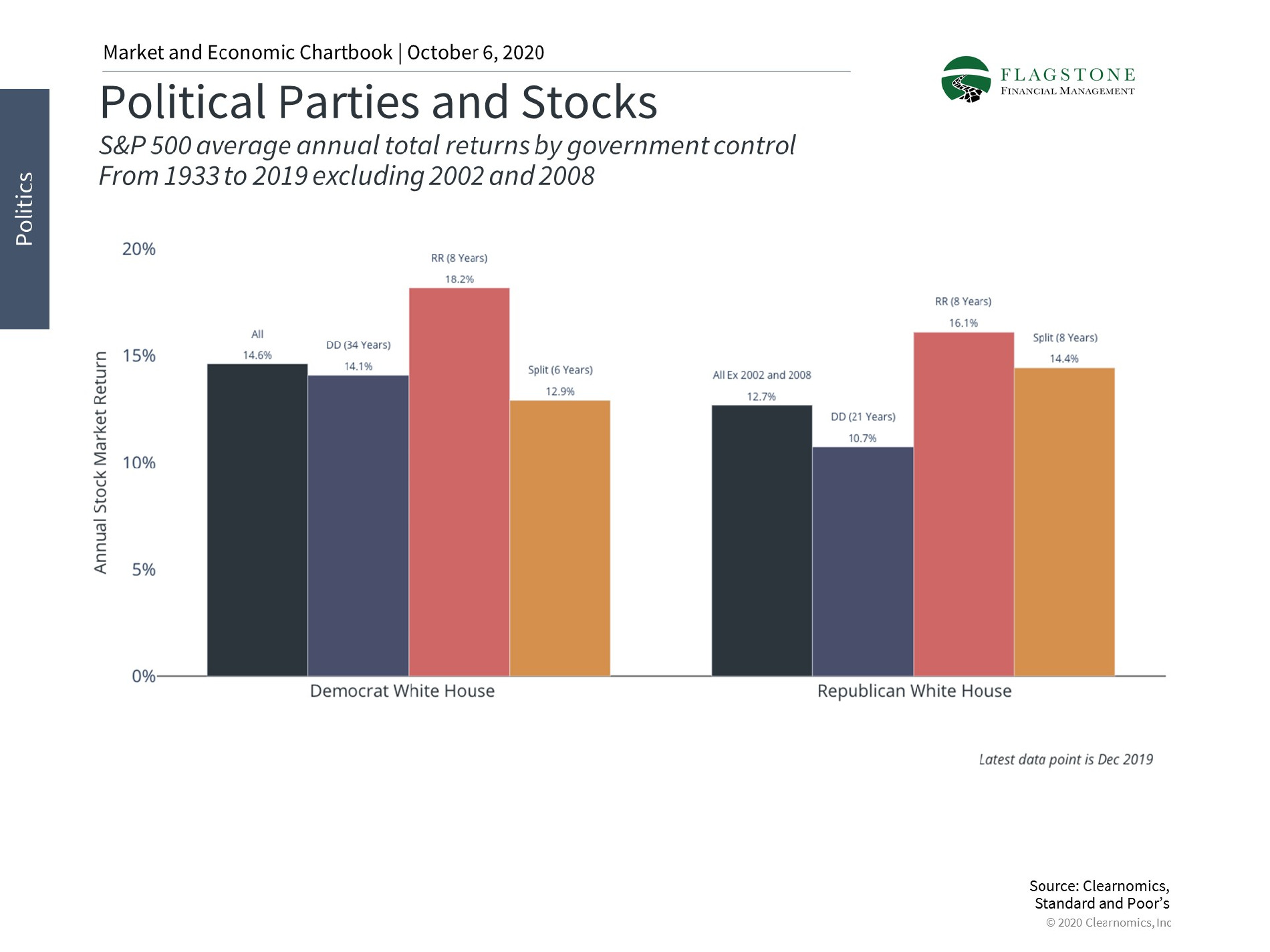 The presidential election is front-and-center in the minds of investors. Although we all have firmly established notions about each party and their economic policies, the reality is that stock markets have done well under both Democrats and Republicans. This is true even after adjusting for Congressional control.

The Fed has made it plain that they will continue to support the economy through the economic crisis. Their updated Summary of Economic Projections show that they intend to keep interest rates at or near zero percent through at least 2023. This is in addition to other Fed policies which have greatly expanded their balance sheet this year. 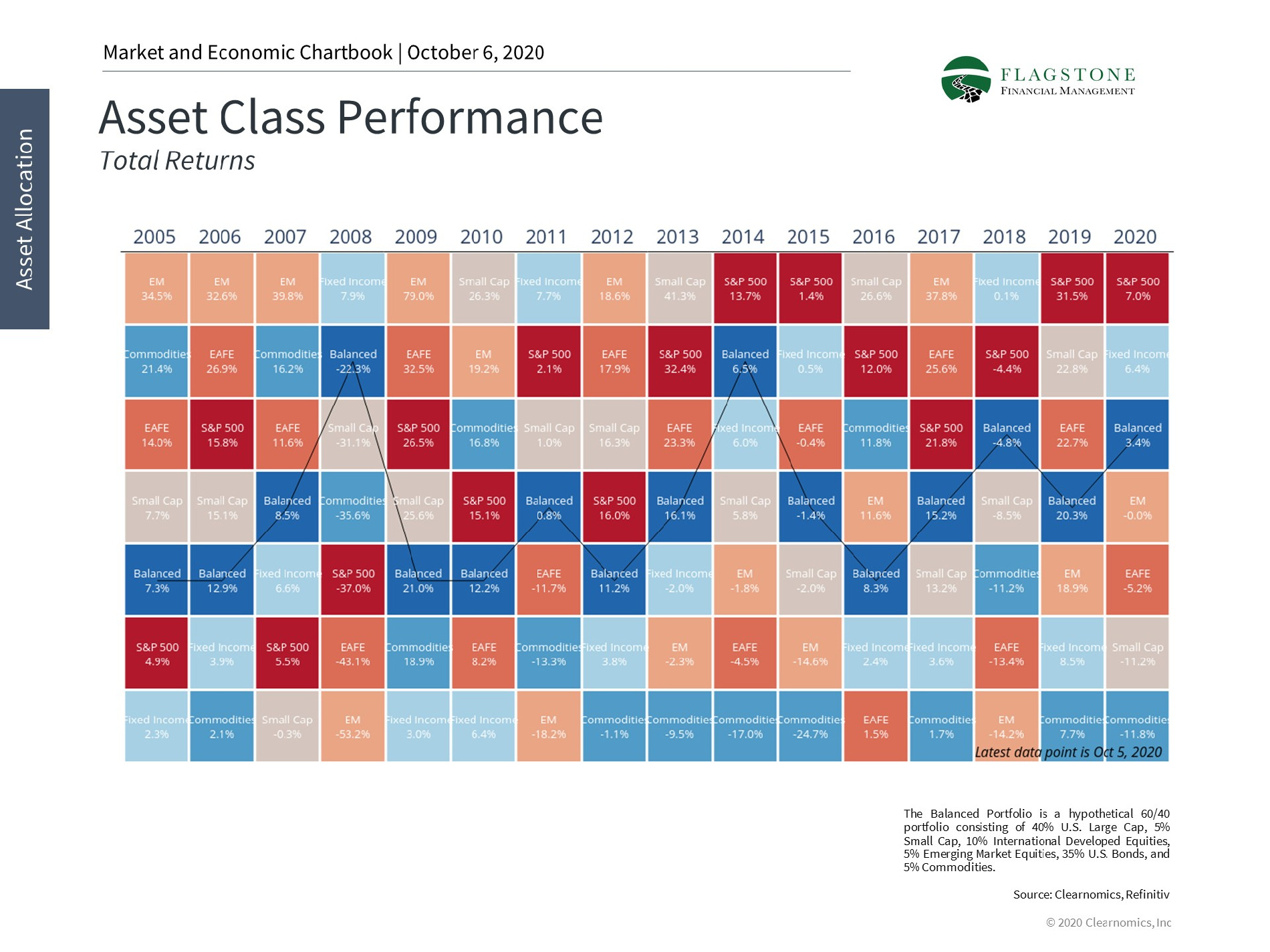 In the long run, investors who can stay properly diversified and invested have greater odds of financial success. This year is further proof that holding an appropriate mix of asset classes can help investors to weather any storm.

The bottom line? Although elections and the pandemic may bring significant uncertainty, this may present opportunities for long-term investors.